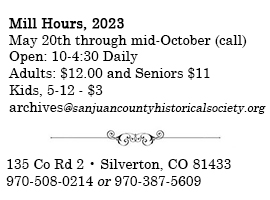 The American West once had hundreds of precious metal mills. Now, most are in various stages of ruin. One important exception is the Mayflower Mill, (or the Shenandoah-Dives Mill) located two miles northeast of Silverton. A National Historic Landmark, this wonderful piece of mining history is open to the public. Witness first hand how the miners were able to extract gold, silver and base metals from the hard rock ores in this complete processing mill. The San Juan Mountains of southern Colorado were one of the last ranges to be prospected. Although some prospectors were still looking for placer gold, it was becoming quite evident that if any wealth was to be made in the San Juans, it was going to be in underground lode mining.

When word of several rich strikes hit the northern mining camps, the rush was on, with prospectors and miners swarming in by the thousands. Mining was here to stay for the next 125 years. The technique of deep hard rock mining was well established and with advances in transportation (and machine drills), the amount of ore to be processed increased dramatically. The Mayflower Mill was the last and the most advanced of the big mills to be built in the San Juans.

The Mill began to take shape in the summer of 1925 as the dream of Charles A. Chase, who had made a reputation as a successful mine manager at the Liberty Bell near Telluride, Colorado. In the spring of 1929, a contract was issued to Stearns-Roger Manufacturing Co. of Denver for $375,000 to erect the mill. It was to be built of pre-framed Oregon fir, a good choice for the mountain environment and harsh San Juan winters it would have to withstand. The latest industrial equipment was employed in its construction, including the innovative steam shovel and dump trucks coming onto the market, incorporating the latest in mill technology. Construction was pushed to take advantage of the short mountain summer. The mill was completed in six months, and started processing ore in February of the following year. The Mayflower Mill was the single longest running mill in the history of the San Juan Mountains. In its 61 year milling career from 1930 to 1991, it was shut down only a total of 12 years, resulting in 49 years of actual milling. The total amount of rock milled is estimated at 9,700,500 tons. The Mill produced 1,940,100 ounces of gold; 30,000,000 ounces of silver; and 1,000,000 tons of combined base metals -- a remarkable record for hard rock mining in the 'old' techniques seldom employed in today's modern mining world.

The Mill recovered metals from the ore by gravity separation and by selective flotation. Sulfide ore minerals were concentrated by froth flotation, a method used in the early twentieth century that allowed processing of ores. The original mill equipment is still in working order. It is the only intact and functional mill of its kind in Colorado.

The Mill was declared a National Historic Landmark in 2000. The Mill is owned by the San Juan County Historical Society of Silverton, Colorado, which staffs an information and gift shop at the mill under the name Mayflower Mill. The mill is open for self-guided tours in the summer months.

The Mill closed in 1991 and sat vacant until Sunnyside Gold Corporation donated the Mill, out-buildings and acreage near the Power Station to the San Juan County Historical Society. The Society has made great strides in preserving this Mill, but there is a lot more work to do.

Structural stabilization work was completed at the Shenandoah-Dives (Mayflower) Mill in the initial phase of a major rehabilitation effort funded through a Congressional Appropriation and a grant from the State Historical Fund totaling $375,000. Phase One of the project focused on the restoration of the tram terminal, ore conveyor and its trestle substructure and custom or bins. Improvements were made to the drainage and grading around the site to direct runoff away from several buildings where tailings deposits had accumulated over the 60 plus years of the mill's operation. In addition to the planned work in phase one, the wood floor in the conveyor has been selectively repaired and replaced. With these floor repairs in place, tours of the conveyor will significantly add to the drama of our future visitor's experience at the mill.

The Society was awarded $154,000 in 2011 from the State Historical Fund with a $70,000 match coming from several other institutions, including the National Trust for Historic Preservation, for the rehabilitation of the Assay Office building. The Shenandoah-Dives Mine Company's operation was based out of the historic Assay Office building. Located at the center of the mill complex, the building served as the central focus for the company's business, including exploration and processing of ore, and housed the office of Charles Chase, the highly regarded General Manager and founding officer of the Company.

The Assay Office building is a unique hybrid flat roof construction, using a heavy timber frame with light stud frame in fill. The structure has undergone many alterations during the course of its history and this project will attempt to preserve many of the elements that tell the story of the buildings evolution. Spreading limited resources to preserve all ten industrial components on the Mill site is challenging, and the maintenance of the entire complex has hampered the Society's in maintaining the assay building without outside help. The whole project is a huge undertaking for our small underfinanced organization. The development of the assessment of all the buildings at the site and the award winning H.A.E.R documentation with the National Park Service in 2009 started us toward success. We hope to complete Phase II and expect to submit a grant for Phase III in 2013. It will focus on the interior finish of the assay office as well as significant deterioration in the coal tank trestle and historic water tank located in the upper level of the site.

The rehabilitation of the Assay Office building will provide important rental income for the Society and honor the historic contributions to the floatation milling industry that Charles Chase brought to the San Juans. Each structure within the National Landmark boundary of the Shenandoah-Dives Mill complex will be rehabilitated in successive phases, and the preservation of the site will significantly compliment the other heritage treasures along the Alpine Loop.

Drop by the Mill during the summer for a tour of the Landmark status floatation technology that exemplifies the Shenandoah-Dives operation and get a first hand look at a major preservation project in process. Take a self-guided tour of this once operational gold mill and see how gold and silver were processed after the ore came out of the mine. Visit the Aerial Tram House, where the buckets and tram system are still in place.

Ask about our Heritage Pass.
Save on a tour package; Old Hundred Mine Tour, the Mayflower Mill and Mining Heritage Center & Jail.